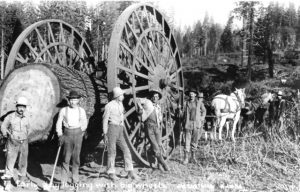 The Nevada County Historical Society had its beginning in the fall of 1944 after being inspired by Dr. Robert E. Burns, President of the College of the Pacific. Dr. Burns was interested in the preservation of the history of the Mother Lode and gold country, and he spoke to the Grass Valley Lions Club about organizing a county historical society. Soon afterwards another meeting was held for more people who were interested, after which a constitution and by-laws were adopted. The objective of the new organization as stated in its constitution was to preserve every source of Nevada County history. The new society began with 48 members, and dues were a dollar a year! Monthly programs were planned to entertain and educate members, and the committee chairmen and groups formed the foundation of the society by collecting, displaying, and preserving the memorabilia of the county. The Firehouse Museum in Nevada City, the Mining Museum in Grass Valley, and Searls Library in Nevada City were opened to locals and tourists alike. The Nevada County Narrow Gauge Railroad Museum opened in Nevada City during May, 2003.

Meeting Information:
The Board of Directors Meetings are held the second Thursday of each month at the Historical Society’s new building at 161 Nevada City Hwy, Nevada City. Meetings begin at 5:00 pm and all interested parties are invited to attend.

General Membership Programs:
These programs are held the third Thursday of the month at 7:00 pm, at Sierra Presbyterian Church (175 Ridge Road, Nevada City), free of charge. These programs are regularly announced in the local media and can also be found posted on our Events Calendar. All interested parties are invited to attend. Refreshments are usually served following the general membership meetings.