Sun Mar 1 – BUFFALOED – 1 hr 35 min – Not Rated. Young Peg Dahl (Zoey Deutch) has her eyes on getting into an Ivy League university but when she actually is accepted, she realizes she can’t afford it. To raise the money, she tries all kinds of schemes, each a little more outrageous than the last. Director Tanya Wexler has created a raucous comedy that tracks one woman finding her calling while wringing hearty laughs out of a particularly timely and honest reality. “It’s a high-paced, quick-witted film that capitalizes on the charisma of its lead actress and a story that is as engaging as it is informative and entertaining.” -Pamela Powell, Reel Honest Reviews. Rotten Tomatoes 100%

Sun Mar 8 – LONG STRANGE TRIP: The Untold Story Of The Grateful Dead – 4 hrs – R. Long Strange Trip is the first full-length documentary to explore the fiercely independent vision, perpetual innovation, and uncompromising commitment to their audience that made the Bay Area band one of the most influential musical groups of their generation. The film provides poignant insight into the psyche of late lead guitarist Jerry Garcia, whose disdain for authority clashed with his de facto leadership of the sprawling collective that kept the show on the road. With a soundtrack that captures some of the band’s most dynamic live performances as well as unguarded offstage moments and never-before-seen interviews, footage and photos,Long Strange Trip explores the Dead’s singular experiment in radically eclectic music making. “A trip that’s well worth taking.” Critics Consensus – Rotten Tomatoes 100%

Sun Mar 15 – ONCE WERE BROTHERS: Robbie Robertson & The Band – 1 hr 42 min – R. Once Were Brothers is a confessional, cautionary, and occasionally humorous tale of Robbie Robertson’s young life and the creation of one of the most enduring groups in the history of popular music, The Band. The film is a moving story of Robertson’s personal journey, overcoming adversity and finding camaraderie alongside the four other men who would become brothers in music. Once Were Brothers blends rare archival footage, iconic songs and interviews with many of Robertson’s friends and collaborators including Bruce Springsteen, Eric Clapton, Van Morrison, Martin Scorsese, Peter Gabriel, Taj Mahal, Ronnie Hawkins, and more.Sun Mar 22- BALLOON – 2 hr 5 min – Not Rated – In German with English subtitles. BALLOON is based on the true events of one of the most daring escapes of the Cold War in which two families living in Communist East Germany sailed over the heavily fortified border in a homemade hot-air balloon. In the summer of 1979, the Strelzyk and Wetzel families—who had been working on their audacious plan for more than two years—try to flee East Germany in a self-made hot-air balloon. But after the balloon crash-lands just before the West German border, the Stasi find traces of the attempted escape and immediately launch an investigation. In a nerve-wracking race against the clock, the two families attempt to build a new escape balloon as the Stasi get closer and closer each day…”Flies high with thrills to spare.” – USA Today.

Sun Mar 29 – THE WHISTLERS – 1 hr 37 min – Not Rated – In Romanian and El Silbo with English subtitles. Not everything is as it seems for Cristi, a police inspector in Bucharest who plays both sides of the law. Embarking with the beautiful Gilda on a high-stakes heist, both will have to navigate the twists and turns of treachery and deception. A secret whistling language spoken on the Spanish island of La Gomera might just be what they need to pull it off. “EXCITING. A nifty, twisty drama. An elegant and stylishly crafted piece of entertainment.” – Peter Bradshaw, The Guardian

Sun Apr 5 – CORPUS CHRISTI – 1 hr 56 min – Not Rated – In Polish with English subtitles. 2020 Academy Award Nominee. Best International Feature Film. After spending years in a Warsaw prison for a violent crime, 20-year-old Daniel is released and sent to a remote village to work as a manual laborer. Over the course of his incarceration he has found Christ, and aspires to join the clergy – but his criminal record means no seminary will accept him. When Daniel arrives in town, one quick lie allows him to be mistaken for the town’s new priest, and he sets about leading his newfound flock. His unconventional sermons and unpriestly behavior raise suspicions among some of the townsfolk – even more so as he edges towards a dark secret that the community hasn’t revealed in the confessional booth. “Corpus Christi is a one-of-a-kind film that is funny, fresh, moving and one of 2019’s best.” -Hanna B., Film Threat

Sun Apr 12 – WINNERS & HIGHLIGHTS FROM THE 2020 WILD & SCENIC FILM FESTIVAL –The winner of the Student Filmmaker Award, A Walk Through the Land Of 1,000 Hills(11 min), introduces Rwanda National Park Ranger Claver Ntoyinkima as he guides you through one of the most biodiverse places in the world. The Sacramento, At Current Speed(38 min), winner of the 2020 People’s Choice Award, presents the hidden world of the Sacramento River. Bears of Durango (59 min) was a crowd favorite and one of the most talked about films at the Festival. Dive headfirst into bear dens with biologists who have spent 6 years investigating why there have been increases in human-black bear conflicts.  SPECIAL ADMISSION: $15.00 – This program is a benefit for the South Yuba River Citizens League (SYRCL).  Advance tickets available at  www.sierratheaters.com 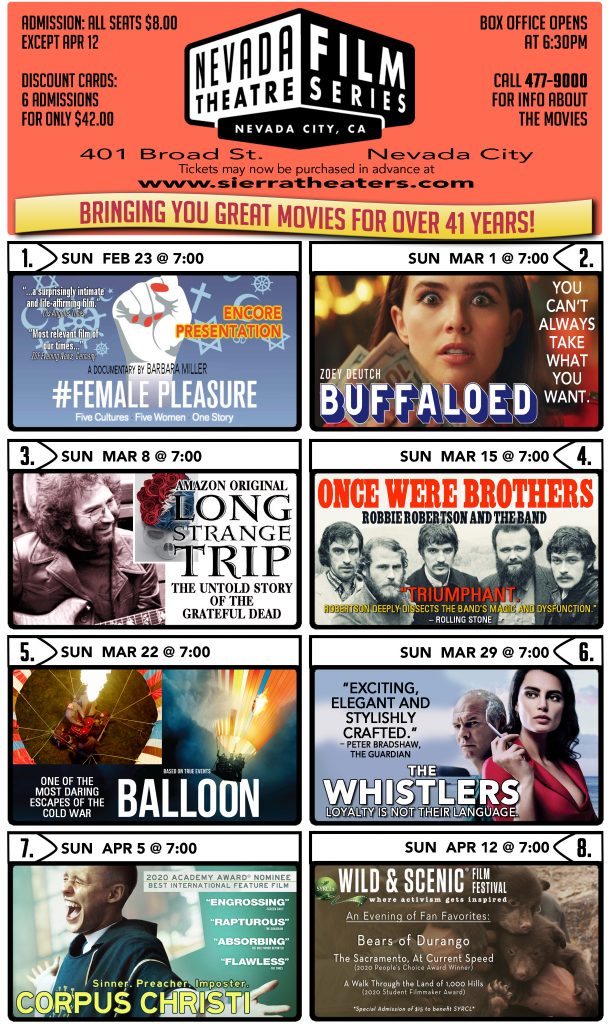