San Francisco Bay Area songwriting deviants, Tumbledown House, have never been easy to describe. Modern speakeasy, saloon jazz, parlor pop, and Tom Waits in a cocktail dress are some of the terms used, but none of these successfully convey the band’s incomparable ability to fuse vintage sounds and themes from yesteryear with the modern instrumentation, refreshingly original compositions, and raw energy that we expect from today’s performers.

Tumbledown House began in the rain-soaked streets of Portland, Oregon back in 2009. Since then, the band has performed over 850 shows throughout 25 states and has recently released their third full-length studio album, “Sum and Substance”. In 2012, the band relocated to the San Francisco Bay Area, where they teamed up with clarinet virtuoso Zac Johnson, upright bass wizard Ryan Lukas, and creative percussionist Aaron Kierbel, who provide the perfect sonic landscapes for the intricately crafted songs of sultry vocalist Gillian Wolfe and producer/guitarist Tyler Ryan Miller. The resulting group has become just as notorious for their raucous speakeasy parties as they are adored for their intimate seated events, which are oftentimes enriched by lush storytelling; their ability to charm audiences of all walks of life is making Tumbledown House a rising festival favorite throughout Northern California and beyond. 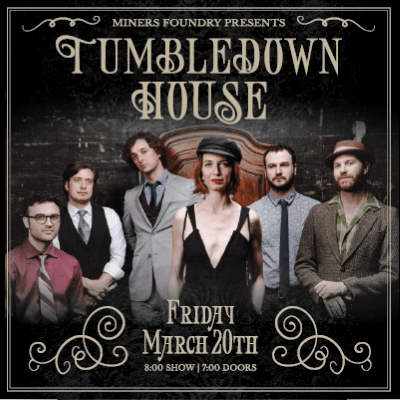 It’s 25 years since West Australian sisters Donna and Vikki Simpson (now Vikki Thorn) joined forces with Josh Cunningham to create one of the country’s best-loved bands. That cover shot, taken near Cunningham’s home on the NSW south coast, marks The Waifs’ quarter of a century together, but it’s also a nod to Australia itself, its nature and its people, essential ingredients in the extraordinary body of work The Waifs have created in that time.