The Yuba River Charter School will be having a “One Love Benefit Concert” for its 8th grade class on Friday, February 21st at The Miners Foundry Cultural Center at 325 Spring St, Nevada City,  7:30pm-12am. The concert will feature popular reggae artists- Kurrency King, Soulmedic and Sista Kat with the Clarks Band, 13 year old rap artist -Lxuie Lemon and folk funk group- Box Car Nitties and will include a raffle of local made goods and services.

Doors will open at 7:30pm to KVMR’s own DJ Redlocks spinning music; Dj Redlocks is a local reggae ambassador whose show –Ital Culture has been airing on KVMR for almost 20 years. Local folk funk band- Box Car Nitties will be kicking off the live music at 8:30pm with their unique sound wildcrafted in the hills of Nevada County. The anticipation of Lxuie Lemon’s fans will finally be over with his 9:15pm scheduled performance. Lxuie Lemon is a 13 year old celebrated rap artist whose albums Lxuie’s world 1 and 2 made a high impact on the hip hop industry, garnering many local fans loyal to the upcoming young artist. Local legend- Sista Kat will be bringing her strong message of upliftment at 9:45pm. For over a decade, Sista Kat has been a positive female role model and continues to make great reggae and hip hop music.

At 10:30pm a raffle of several high value local goods and services will ensue with Soulmedic taking the stage shortly after. Soulmedic is a international reggae artist and producer based locally whose releases have been celebrated worldwide and current single “Terrible” is gaining traction in the worldwide charts. Jamaican reggae artist and positive vibes generator- Kurrency King is scheduled to play at 11:15pm. Kurrency Kings’s high energy performances are legendary and his 2016 release- Solider of Love is his testament to positive upliftment through music. The all star Clarks Band will be backing the three final reggae performances. The Clarks band consists of Walker P. on keys, Tuff Lion (early guitarist of Midnite and I Grade recordings) on Guitar, Toho Saunders (bassist for Don Carlos) and the famed Zioneers drummer – Ras Pule Abajonhoy.

Please join us on Friday February 21st to celebrate the One Love Benefit Concert at the Miner’s Foundry at 325 Spring St Nevada City, 8-12pm to benefit Yuba River Charter Schools 8th grade class. Tickets will be available at the Briar Patch. This will be an unforgettable evening of giving back to the community and local youth by dancing and enjoying yourselves with the beautiful people of Nevada City. 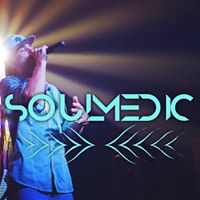 In recent years Soulmedic has released 6 solo albums, 2 riddim compilations, hosted 4 mix cds and has seven featured singles on other labels’ riddim compilations. In this past year, Soulmedic has had successs in the release of his 5th studio album- “Fyah Forward” with singles- “Crown Me” https://soundcloud.com/jahkebramusic/soulmedic-crown-me, and “My #1 Girl” https://soundcloud.com/reggaeville/soulmedic-my-1-girl-jah-kebra-music-2015 gaining international attention, showing up on playlists worldwide including David Rodigan’s show on BBC radio. Fyah Forward was featured on the Itunes reggae page for several weeks since its release, and is Medic’s self acclaimed- “best work to date”. Soulmedic is also an accomplished producer and recently released the “Kilimanjaro Riddiim” on the Jah Kebra Music label- a heavy roots and culture release featuring Marlon Asher, Pressure Busspipe, Messenjah Selah and more. In 2012 Medic digitally released the “Hyphyhall Riddim” on the Jah Kebra Music label through 21st Hapilos dist. featuring Spragga Benz, Pressure, Perfect, Marlon Asher, Mega Banton and more over a track written/produced by Soulmedic himself.

With powerful presence, Soulmedic is an accomplished performer and has touched the west’s best stages including- Warped Tour, Reggae Rising, Woodstock 40th Anniversary , Island Fest, Monterey Bay Reggaefest, Seattle Hempfest, Sierria Nevada World Music Fest (w/Lion Camp), Reggae on the River (w Lion Camp and others), NWWRF, Reggae in the Mountains among others and sets his sights on Europe, US and Caribbean for the upcoming touring year. Soulmedic is teaming up with generosity.org and Warped tour this year to deliver -Wells on Warped- a program to directly fund water wells in underdeveloped communities in need in Africa and South America- check out generosity.org for more info and to donate to this great humanitarian effort.

Being the change you want to see and strength of unity are some of Soulmedic’s most echoed messages. As a father of 4 children, Soulmedic remains progressive and on the grind with “world wide musical healing as the goal”.