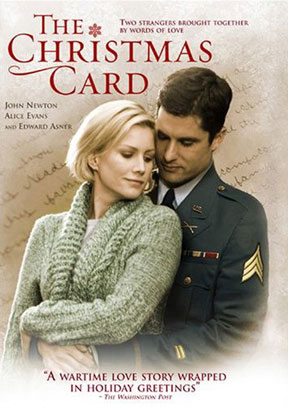 “The Christmas Card,” filmed in Nevada City, tells the story of a soldier, Cody Cullen, with no family who, while serving in Afghanistan, receives an anonymous holiday card that touches him deeply. While on leave back home, he travels to Nevada City, California, the picturesque town from which the card was sent. Once there, Cody meets and falls in love with beautiful Faith Spelman, who sent the card, and quickly becomes a cherished member of the Spelman family. Yet romance for Cody and Faith seems out of the question, because she has a boyfriend and is about to become engaged.

Screenwriter Joany Kane had never even heard of Nevada City when she wrote the screenplay for “The Christmas Card.” The story was originally set in a mill town in Vermont. Budget constraints led the production team to look for sites in California, and one of the producers, Lincoln Lageson, suggested Nevada City. He was familiar with the town because his parents grew up in Nevada City. Alice Evans (who portrayed Faith in the movie) talks about Nevada City:

“But there is one that looks even better; so perfectly preserved and warm and welcoming that you have to pinch yourself the first time you take that walk up the hill towards the church, just to make sure it’s real.

Well, this town turned out not only to be the perfect town, but to have the perfect inhabitants, who were delighted not only to welcome “The Christmas Card” to their town, but also to loan out their diner (Nevada City Classic Cafe), hotel, church and of course their people, who served as the most brilliant supporting artists all through the film.”

“It was a match made in heaven,” Kane said. “The city really is a character in the movie.”

Experience the magic of Nevada City first hand at Victorian Christmas. This annual, family tradition takes place in December and features holiday activities for all ages: carriage rides, live entertainment, savory yuletide treats and libations, and of course, Father Christmas! The event is held in December, two Wednesday nights, and three Sunday afternoons. There is no admission charge.

Lodging: Overnight visitors are encouraged to book local accommodations early. A dozen historic and charming bed and breakfast inns and several comfortable hotels and motels are located within walking distance of downtown Nevada City, or a short drive from nearby Grass Valley.

Visit Screenwriter Joany Kane’s website, and purchase some of her other un-produced screenplays.  A portion of the proceeds will be donated to the Chamber of Commerce.  www.joanykane.com