The Center for the Arts OnTheGo series brings Rupa and the April Fishes to the historic North Star House in Grass Valley for a picnic concert on Friday, June 14.

Rupa and the April Fishes create a sound that pulsates with the pluralism of Bay Area culture, celebrating life and the art of resistance through a wide musical palette that pulls from over a decade of playing street parties, festivals, and symphonic concerts through 29 countries with songs in 5 languages. Under the direction of composer, front woman, activist and physician Rupa, the band creates a live experience which is a manifestation of a world beyond nations, where the heart of humanity beats louder than anything that divides us. This is Liberation Music.

The group’s first album eXtraOrdinary rendition (2007) examines love and loss from many angles, with lyrics mostly in French; the second Este Mundo (2009) follows their journey from Tijuana to Texas, tracing the plight of migrants crossing borders, largely in Spanish; the twelve songs of BUILD (2012) examine the road from solitude to solidarity in both directions and arise from a particularly tender moment of global awakening—from the collapse of capitalism and false democracies to the rise of populist movements around the world. Their LIVE at the Independent (2013) album was produced at the request of fans and has become a historic document at the center of a lawsuit which liberated “Happy Birthday To You” back to the commons where it belongs. Their most recent release OVAL (2015) is a luscious collection of string quartet Rupa’s most intimate love songs arranged by composer Mark Orton for Quartet San Francisco.

In April the group released their sixth album Growing Upward in a plastic-free, plantable format–as a set of seed packets. These songs come from a time of Rupa’s deep engagement as a physician in places where the social underpinnings of what ails us becomes starkly clear, working closely with groups struggling for dignity, health, and sovereignty in a time of climate catastrophe. Laced with love, optimism and unflinching analysis and inspired by direct conversations with Gil Scott Heron, families who have lost their loved ones to police violence and the indigenous grandmothers at Standing Rock, this album is a document of where we are today and where we can focus our gaze in order to rise to the challenges that face us on planet earth. The album features artwork by a longtime collaborator, the art-ivist and muralist, Mona Caron.

Food and treats will be available including tacos, ice cream and more. 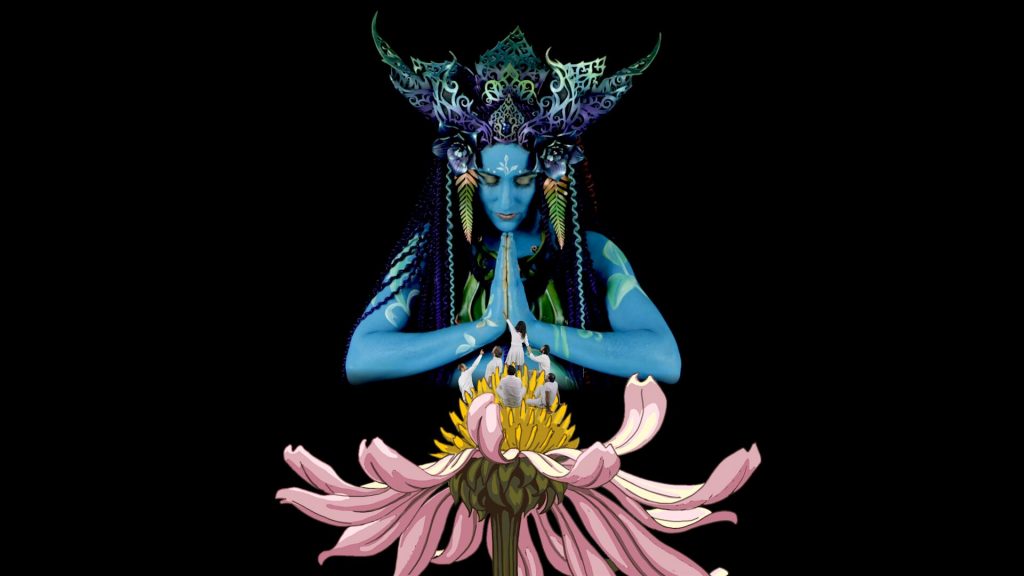 WHO: The Center for the Arts OnTheGo Presents

WHAT: Rupa and the April Fishes with Special Guests

**************************************
Borderless ensemble Rupa and the April Fishes has always been rooted in activism—in subject matter and practice. Rupa has taken on love, loss, and xenophobia in the Bush years and the plight of migrants crossing borders. After a live album was hit with a licensing claim, Rupa faced up to media giant Warner in the legal battle that affirmed the public domain status of “Happy Birthday” and returned $14 million to artists.

Multicultural fusion? Global indie rock? It’s hard to pin down the sound of Rupa and the April Fishes, and that’s how Rupa likes it. “I call it purposeful boundlessness. I don’t strive for a style.” Their eclectic sound is shaped by a multitalented string section (Misha Khalikulov on cello, Matt Szemela on violin), diverse rhythms (Aaron Kierbel on drums, JHNO on organ, Daniel Fabricant and Todd Sickafoose on bass), and soaring trumpet (Mario Alberto Silva). The common ground in which each song sprouts is Rupa’s distinctive, expressive vocal style, ranging from ethereal heights to low earthy tones.

One label that does sit comfortably with Rupa is “Liberation Music,” a designation bestowed by Gil Scott Heron, the legendary spoken word poet and godfather of rap. When Rupa spent time with him not long before his death, they spoke about post-national identity, and Heron asked her to contribute to America’s dialogue about race. “What I learned from him was not being afraid to expand my sense of genre,” Rupa recalls. “It’s my job to communicate honestly and passionately using whatever palette I have, to create a sound identity that exists beyond borders.”

There’s a new sense of urgency on their sixth album to match the current political and ecological climate. Its 12 songs took shape over a seven-year span as frontwoman Rupa, a doctor and social thinker as well as a musician, underwent experiences that transformed her: providing medical care to hunger strikers protesting police killings in San Francisco; treating Water Protectors confronting state-supported violence at Standing Rock, collaborating with Lakota/Dakota healers and leaders to decolonize medicine by creating a clinic in North Dakota, becoming a mother. “All those intense experiences are reflecting on the same crisis.” Rupa reflects, “Everything we face is interconnected: the international rise of fascism, the festering of American racism, the increase in police violence, the ongoing oppression of indigenous people, the imminent threat of catastrophic climate change.” The result is an album of impassioned songs energized by Rupa and the April Fishes’ global perspective that offers strength and solace to those already in the fight and a call to action for everyone else.

Responses to Heron’s challenge shape the album’s most powerful songs. “Yelamu (We Are Still Here),” an electronic track produced by Rupa and Damion Gallegos, amplifies the voices of marginalized peoples. The rhythmic spine of the song comes from radical Chicano performance artist Guillermo Gomez-Peña reciting a “Declaration of Human Rights from The Other San Francisco,” co-written with Rupa. The words “we are still here” spoken in many indigenous languages create a counterpoint. A diverse cohort of activists lend their voices: Kalamaoka’aina Niheu (Kingdom of Hawaii), Tasos Sagris (Greece), Antonio M (Comanche/Otomi/Costanoan), and Tipiziwin Tolman (Lakota Nation). “It was important to me to collect voices from all places we’ve visited,” says Rupa, “and to bear witness to the astounding resiliency of the people we’ve met along the way.”

Listening to and singing with indigenous people is a taproot that feeds Growing Upward. The anthem “Frontline” was written at the request of the grandmothers at Standing Rock. Rupa had already written “Water” and released a recording online in 2005 when Ojibwe matriarch Sharon Brass invited Rupa to record an indigenized version. Rupa collaborated with a circle of native women in British Columbia to create a new track, “Water Song,” that layers their voices— howling, chanting, and serenely singing in languages from along the Pacific Coast— over the haunting sounds of four-foot-tall gongs played by guest artist Karen Stackpole.

The album’s title track Growing Upward explores what reconnecting to indigenous perspectives sounds like. “This song grew out of talking with indigenous people who haven’t lost the capacity to hear nonhuman voices,” Rupa explains. “I tried to imagine what it feels like to be a dandelion seed germinating under asphalt and breaking through.” The track showcases Rupa’s versatile vocal and verbal style, opening with a full-throated sinuous melody that climbs like vine tendrils over a rich sonic undergrowth of strings and marimba. Then a rhythmic break has Rupa reciting tabla bol and rapping about contemporary threats to the wellbeing of seeds and humans alike. Video artist Zen Cohen has directed a powerful music video to be released on April 1, the perfect date for a band named after a French April Fool’s Day tradition.

What Rupa and the April Fishes offer with Growing Upward—both musically and lyrically—is a hopeful map to a better future. “The central idea for this album is encountering indigenous cultures, collaborating, and learning humility from them,” Rupa elaborates. “Confronting past and present wrongs with humility doesn’t have to be dismal or miserable; it can be full of compassion and joy. When we look back with kindness and open-heartedness, we can go forward in the right way and correct past wrongs.”

“For years, Rupa Marya led a double life. She spent half her year wearing a white lab coat, working as a physician and an associate professor of medicine at UCSF. The other half, she was on the road in flowing flower skirts performing at places like the Montreal Jazz festival and Outside Lands as the lead singer, songwriter and musical director of the genre-bending world music outfit Rupa and the April Fishes…“- San Francisco Chronicle