A note from Joany Kane, writer of The Christmas Card, December 2020

Back in the tail end of 1998 I was working on a Christmas romance screenplay. I had the title, “The Christmas Card,” and I had the general idea, a serviceman serving overseas receives a Christmas card from a young woman and it touches him so deeply he sets out to meet her and to thank her. I knew I wanted to honor my dad who served in World War 2 and to honor my mom who faithfully sent out hundreds of Christmas cards every Christmas. Other than that, I didn’t have any details for the story.

The week between Christmas and New Years 1998 I started a new job working in the office of a lumber mill in western Massachusetts. It was a “day job” to pay the bills while I toiled at night trying to make my writing dreams come true. The first Friday of 1999, January 8th, a logger walked into the mill and for me it was love at first sight. That weekend I formulated “The Christmas Card” setting the family business at a lumber mill. I finished the script March 1999 and brought the very first printed copy of the script “The Christmas Card” to the logger (Dave), on March 23rd, and from that day until now we have been together, living a happily ever after for close to 22 years.

The story I had originally set in Vermont. At the time of writing the script I didn’t even know there was a Nevada City, CA. I eventually sold the script to Hallmark and it was a producer, Lincoln Lageson, from the Hallmark world who immediately thought of Nevada City as soon as he read the script. I bless Lincoln every day because he was spot on in the choice of location. Nevada City brought the story to life in ways I never even imagined. It was a perfect match of story and location. Pure harmony.

The movie premiered December 2006 and it shattered all time ratings records for Hallmark and helped launch their current craze for Christmas. Scenes of a Christmas dance, having fun baking cookies, a romantic sleigh ride, were novel at the time I wrote the script, and now they are staples in most every Hallmark Christmas movie. “The Christmas Card” received several Camie Awards and Ed Asner received an Emmy nomination. I get a ton of emails, letters and messages from fans of the movie and they always mention Nevada City. The movie wouldn’t have had the magic it did if it had been filmed anywhere else. Nevada City is truly special.

In 2010 the town of Nevada City invited me for a visit to honor me with a tour of the town and a certificate of recognition with regards to the “positive publicity “The Christmas Card” has brought to Nevada City and Nevada County.” It was a truly humbling experience, and it was the most amazing few days of my life. I fell in love at first sight with Nevada City just as I had with the logger who inspired the story. I cherished every moment spent in Nevada City. I stayed where Cody stayed, I had dinner where Faith and Paul dined, I spent time in the church and at the diner. I got to tour the mill and the Spelman house. And I stood in the very spot where Faith and Cody shared their happy ever after kiss by the South Yuba River. I have been so inspired by Nevada City, I’ve written several screenplays set in Nevada City that I hope one day will make it to the screen.

There’s magic in Nevada City. In the landscape, in the town, in the people. Nevada City turned “The Christmas Card” into magic and I’ll be forever grateful to the town and the community. 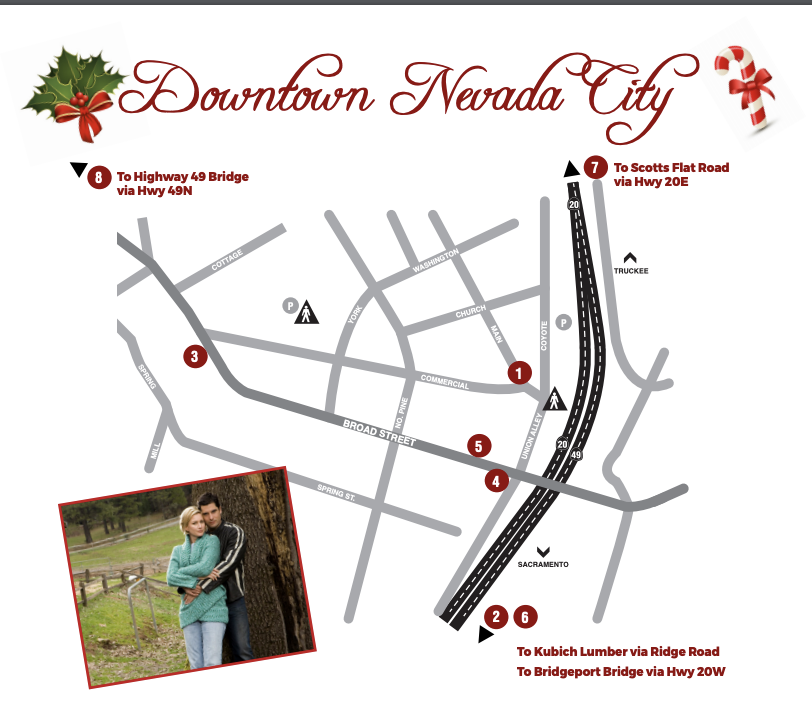