In Paris, things do not exactly get off to a good start for the newly arrived Yoav. He knocks on the door of the flat where he’s supposed to stay, only to discover the place is empty. While he is taking a bath there, his belongings are stolen. Yet this young Israeli, who has arrived with such great expectations, will not be dissuaded that easily. Desperate to erase his origins, Yoav sees becoming French as his only hope for salvation. Step one is to replace his language. From now on, he will not utter a single word of Hebrew and his dictionary becomes his constant companion. The necessary visits to the Israeli embassy annoy Yoav – he finds his compatriots to be a total burden – but the naturalization test also has its pitfalls. And the young French couple whom he befriends has some rather strange ideas about how to help him.

Based on the real-life experiences of writer-director Nadav Lapid’s (The Kindergarten Teacher, Policeman), Synonyms explores the challenges of putting down roots in a new place. Yoav’s attempts to find himself awaken past demons and open up an existential abyss in this tragicomic puzzle that wisely knows how to keep its secrets.

“What makes “Synonyms” so compelling is how it explores the theme of identity through a lens of searing self-reflection.” Hau Chu, Washington Post

“As our world is inflicted by intensifying nationalism, Synonyms is an especially relevant film.”   Nathan Smith, Nashville Scene 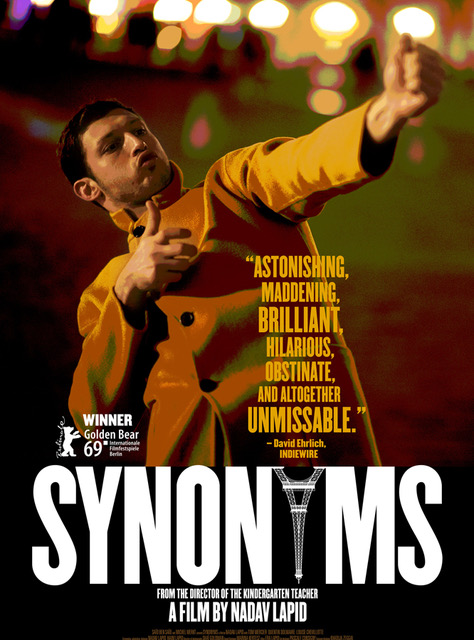 What: “Synonyms” at the Nevada Theatre Film

When: Sunday, December 8th, at 7pm