Johnny Gough in Costa Rica is the third chapter in the continuing story of the adventures of famed police detective Johnny Gough (Pronounced Go). In chapter two, Johnny Gough at the Cheatin Heart, investigations into the (second) attempted murder of infamous crime
figure Frank O. revealed the innocence of his daughter Sierra, the guilt of nefarious Doctor Ursel Opper and his multiple personality wife Gina
and the fact that Frank Os ex-girlfriend and a corrupt District Attorney had fled to Costa Rica with the ill-gotten fortune of the crime boss.
Chapter Three finds Detective Gough in Costa Rica, hot on the trail of the now missing Frank O. Also in the country are the disguised Opper Duo in pursuit of the missing fortune, as well as the innocent Sierra, bent on protecting her father. What no one expected was the appearance of the mysterious lady in black, who displays some daunting powers in furtherance of her own agenda. Music includes hits by The Who, The Cars, The Steve Miller Band, Hall & Oates, Tom Jones, Gloria Gaynor, Dean Martin and other chart-topping artists of the 1960’s, 70’s, 80’s & 90’s This talented cast will take you on a wacky, fun-filled journey of intrigue, power and mistaken identities with plenty of laughs and great music.

Pre-show entertainment is provided by Chris Crockett beginning one hour before show time for all performances. For further information or for show reservations, please call OFF BROADSTREET at (530) 265-8686 or visit the OFF BROADSTREET website at www.offbroadstreet.com 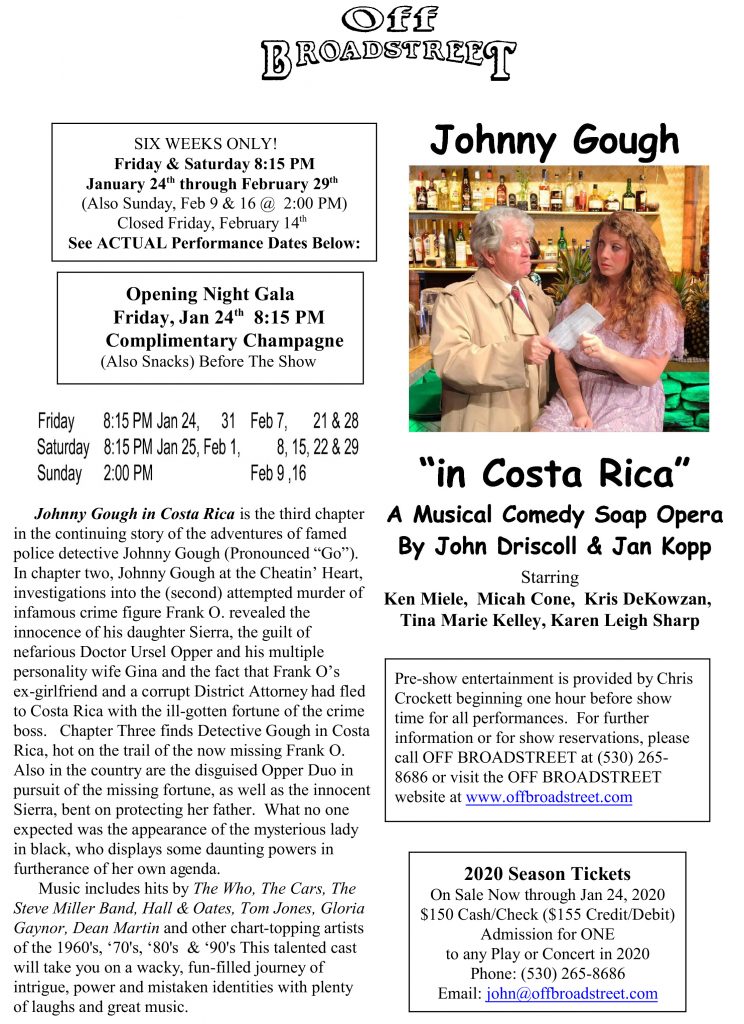