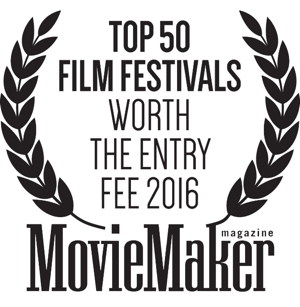 “These are the festivals that will, most likely, form the backbone of your journey on the circuit this year. Careers have been forged in their fires. Your film will find an intelligent, engaged audience who really gets it. Your social media accounts will blow up with future collaborators. You’ll party with crowds you never thought you’d meet, in locales you never thought you’d visit, with drinks you never thought you’d be sipping. And you may well find distribution along the way,” wrote Moviemaker Magazine editors.

“We are humbled to be included in this list of world-renowned film festivals and honored to be recognized for being a valuable platform in launching the careers of independent filmmakers,” said Festival Director Jesse Locks.

Film submissions are now open. Professional, student, and amateur filmmakers are invited to submit short and feature length films in a variety of genres including but not limited to documentaries, animation, narrative, comedy, multi-media, experimental, music videos, virtual and augmented reality.