In an unprecedented event, local Nevada County arts organizations will come together on November 10 at The Foothill Events Center to present a multi-media musical retrospective and community sing-along to commemorate one of the most memorable moments in history, the 100-year anniversary of the signing of the Armistice between the Allies and Germany to end World War I.

Music played an integral role during the war both in uniting the nation and providing moral support to soldiers and civilians. Popular, patriotic songs were composed to encourage people to sing-along so that they felt as if they were part of something larger, something with meaning and purpose.  The songs were made up of simple melodies and written for the piano, a common instrument that many owned and at least one family member who knew how to play. Music was also handed out to soldiers and volunteers at camps across the nation in order to bring them together and to keep morale up.

Some of the most well known musicians and singers of the time also performed for the soldiers at war bond rallies, large concerts on military bases, and in community theaters. One singer in particular serves as the centerpiece of the event on November 10.

German-born opera singer Ernestine Schumann-Heink became “Mother Schumann-Heink” to the American Troops of World War I through her tireless advocacy for the war effort and to improve the lives of American troops and veterans. A household name in America for four decades, with a Hollywood star and numerous other memorials around the country, her annual performances of Silent Night on national radio were a tradition coast-to-coast. She sang the world’s stages with Wagner, Puccini, Strauss, Brahms, Caruso, and McCormack and could fill stadiums and arenas (including the Sacramento’s Memorial Auditorium), but is best remembered for performances with and for American soldiers, including a performance at Camp Fremont with a chorus of 10,000 soldiers. Though she had sons fighting on both sides of World War I, she was a proud American who led the push for America to join the war, and whose San Diego estate was known always to be open to dougboy’s and sailors in need.

Pete Nowlen, Artistic Director for Music in the Mountains will delve deeper into Schumann-Heink’s life, the role of music during the war and more, during a multi-media presentation that features historic videos, recordings and images from the era. A live singer/re-enactor will wear one of Schumann-Heink’s own gowns, now owned by Mary Wesley of Sacramento, Schumann-Heink’s great-granddaughter in-law. Members of Camerata California will perform songs popularized by Schumann-Heink and the event will conclude with a sing-along of World War I era songs accompanied by Ken Hardin, Artistic Director for InConcert Sierra.

“Understanding World War I is perhaps more important than ever. The war, quite simply, shaped the world in which we live,” explained Linda Jack of the Nevada County Historical Society.  “But building a bridge between a community’s past and its present is a challenge. In the early planning stages of the Nevada County Historical Society’s program to commemorate the 100th anniversary of the WWI Armistice, we imagined that one way to build that bridge was through music. We are delighted that with the help of our performing arts community members we have created a program that will allow us to time travel, if only for a brief interlude, to the musical world of war-time Nevada County a century ago.”

Proceeds from the event will go to local Veterans groups. Proudly presenting this event is the Nevada County Historical Society, InConcert Sierra, Music in the Mountains, Center for the Arts, Miners Foundry Cultural Center, The Foothills Event Center, The Union, KNCO, and KVMR. A portion of the event has also been sponsored by a California Humanities and National Endowment for the Humanities grant awarded to the Nevada County Historical Society. 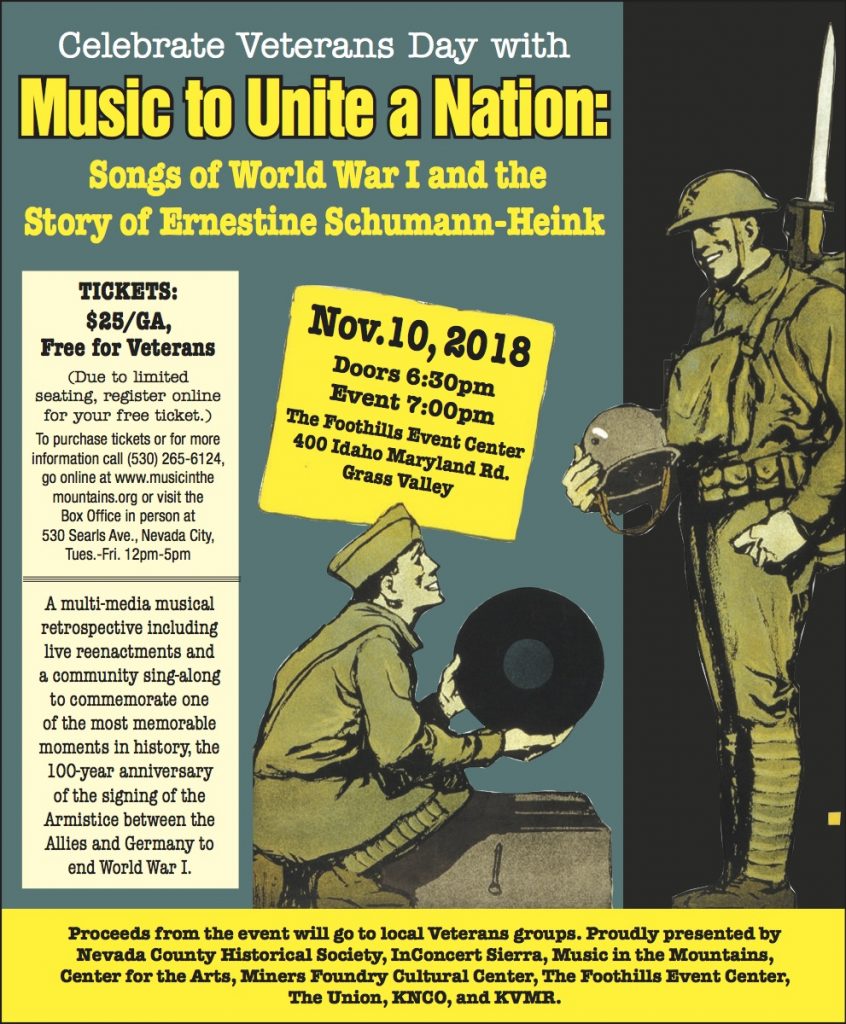 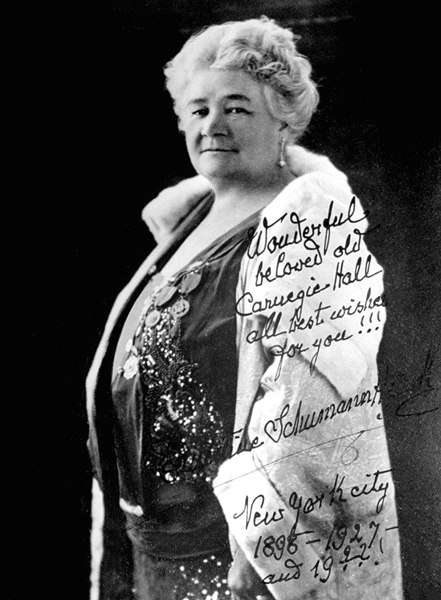 WHAT: Music to Unite a Nation: Songs of World War I and The Story of Ernestine Schumann-Heink

TICKETS: $25/GA, Free for Veterans (due to limited seating, please go online and register for your free ticket)
To purchase tickets or for more information call (530) 265-6124, go online at www.musicinthemountains.org or visit the Box Office in person at 530 Searls Avenue, Nevada City, Tuesday- Friday 12:00 pm – 5:00 pm.