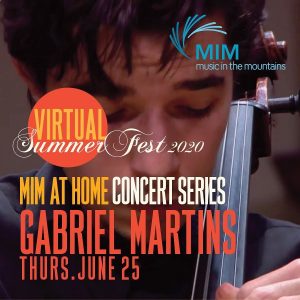 On Thursday, June 25th, 2020 at 7pm, Music in the Mountains will be presenting a cello recital with multi-award winning cellist, Gabriel Martins streaming on their Youtube channel and available to the public.

Music in the Mountains (MIM) began their 2020 SummerFest programming with a successful presentation of pianist Nautsuki Fukasawa, who wowed the audience with her amazing repertoire and superb skill.

“I have to admit that my dearly beloved and I were a little skeptical about watching a performance like this online,” explains MIM Board President Terry Brown. “But we were definitely converted to believers!”

Terry goes on to say, “Not only was Natsuki a fantastic artist whose dexterity we got to watch up close and personal, but Ryan was a wonderful host. The technical streaming part went off close to flawlessly and our only disappointment is that we couldn’t figure out how to get the program on our big screen. That’s my assignment for next week for the cello concert that we definitely won’t miss. A big plus was that, after we RSVP’d ahead of time, we got easy to use links to the “printed” program and the broadcast itself. It couldn’t have been easier!”

Gabriel Martins, award-winning cellist, will perform as the second scheduled concert for Music in the Mountains Virtual SummerFest. He is the first-prize winner of the 2020 Sphinx Competition, 2020 Schadt String Competition, 2018 Oxford Music Award, and 2013 David Popper International Cello Competition.

He has performed with orchestras around the world as a soloist and chamber musician in venues such as Carnegie Hall, the Great Hall of the Moscow Conservatory, and Walt Disney Concert Hall in Los Angeles. According to esteemed cellist Ralph Kirshbaum, he has “revealed heart, passion, intellect, and a finely-nuanced palette of colors in a compelling manner worthy of a seasoned artist.”

“When I heard Gabriel play last year I immediately went up to him and asked if he would like to come to Music in the Mountains,” noted Artistic Director Ryan Murray. “His playing is full of depth and emotion, and he produces an incredible sound out of his cello.” Ryan added, “Although I really wanted to feature Gabriel in a concerto with our orchestra, I think it will be very exciting for the audience to hear the intimate recital he has prepared for us. There is a great combination of old and new in his program, and it is definitely not an event to miss.”

On June 25th, Gabriel will be playing Heinrich Biber’s XVI. Passacaglia from Mystery Sonatas, (c. 1676) arranged by Martins, a collection of 16 pieces composed for the Christian Rosary devotional procession. He will also play Peter Sculthorpe Requiem for Cello Alone (c. 1979), and finish the night with the much beloved Cello Suite No. 1 in G Major by Johann Sebastian Bach.

Music in the Mountains has been bringing live classical music to the Sierra Foothills, the Sacramento Metropolitan area, and surrounding communities for nearly 40 years. Navigating current state and local government health regulations for large event gatherings, MIM has moved their annual summer music festival, “SummerFest,” to online platforms for all to enjoy. The programs are presented on a “pay-what-you-can” basis and folks are encouraged to RSVP by going to the MIM website at www.musicinthemountains.org

What: Live Home Cello Concert with Gabriel Martins
Where: Live on Youtube.com presented by Music in the Mountains
When: Thursday, June 25th 2020
Time 7pm
Price: Pay What You Can
More Information: www.musicinthemountains.org