LeGacy Productions is proud to present the new, smart, endearing comedy “20th Century Blues” at the historic Nevada Theatre May 31 through June 22. Written by Susan Miller (My Left Breast author) the show chronicles the friendship of four women through 40 years. Four very different souls photographed by Danny (LeGacy veteran actress Kim Wellman) who endeavors to create a life long friendship through the eyes of her camera, which has brought her recognition in many artistically significant and successful ways.

LeGacy once again calls on the astute directorial skills of John Bivens, who brought to life LeGacy’s female themed “The Dixie Swim Club” and last years “Dearly Beloved”.
Producer Sue LeGate Halford (also taking a turn as Wellman’s 91 year old mother) expounds on the content..”After Swim Club and Dearly Beloved, we knew we wanted John to direct a strong female show again. This one is just perfect ….a group of women who find themselves traveling through the years together…it’s so current..all the themes. And the fact we are such great close friends together has brought a new impact on the script, which is brilliant in itself. I think everyone, male or female, will really enjoy these characters. We have truly loved putting it all together, and for some crazy reason, John has stuck with us…again!”

Nancy Haffey (Dixie Swim Club and Dearly Beloved) brings to force the veterinarian Gabby, who wants to keep this group together in her easy going way, while inexplicably training for widowhood.

Carolyn Winters (Dearly Beloved) returns for LeGacy in her role as the forceful real estate agent Sil, whose insecurity about aging in this world and her profession keeps her feeling alienated from the group she loves.

Kristine Alcamo (I Can Hear Music and The Crucible) makes her return to the LeGacy stage as the gay newspaper journalist being faced with the loss of her job in her senior years.

Chase Coney (Biloxi Blues) plays Wellman’s adopted son, faced with hesitantly meeting his birth mother, as he hangs on to his “perfect” childhood with a family he adores.

Lighting by Les Solomon solidifies the mood of the show, with a clever set design by Bivens and Solomon.

Performances of “20th Century Blues” are Fridays and Saturdays at 8pm, ONE THURSDAY June 20th at 7pm,  and ONE SUNDAY, FATHER’S DAY, June 16th at 2pm.
Tickets are only $20 in advance, available at the BookSeller and Harmony Books, online at legacypresents.com or by calling (530) 268 5419.

Reserved seating at $35 available online or through calling the box office only.

Come laugh and cry with us at “20th Century Blues”….we will see you at the theatre!!! 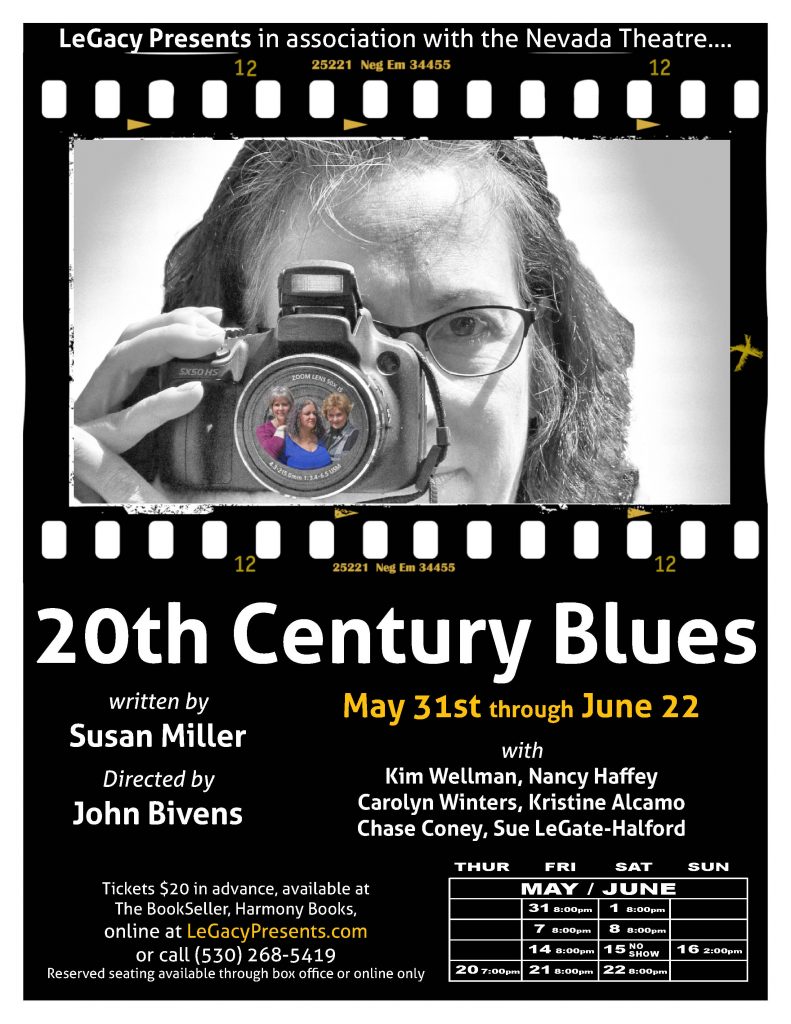