After the cliff-hanger ending of last summer’s zany musical soap opera Go, Johnny Gough, OBS patrons have anticipated this sequel, which will tell “the rest of the story.” As the sequel opens, the prime suspect in the attempted assassination of notorious crime boss Frank O has
disappeared, along with the District Attorney. The case was closed and all charges dropped. And yet the mystery continues. Frank O has
been recently revived and then re-poisoned and is back in a coma.  Acting DA Mason Hart has re-opened the case, and now renowned police
Detective Johnny Gough must sort through new evidence to solve the deeper conspiracy. Is the culprit evil genius Ursel Opper, his mind-controlled wife Gina, or Frank O’s ex-wife Sheila or the new barmaid from the Bayou with a secret past?

With inventive choreography by Tina Marie Kelly and a varied collection of musical numbers including hits by Elvis, The Temptations, Tammy Wynette, Queen, Cher, Tom Jones, The Ronettes and other chart-topping artists of the 1960’s & ‘70’s, this talented cast will take you on a wacky, fun-filled journey of intrigue, power and mistaken identities. Johnny Gough at The Cheatin’ Heart has plenty of laughs and great music and is suitable for all ages

Pre-show entertainment provided by Chris Crockett begins one hour before show time for all performances. For further information or for show reservations, please call OFF BROADSTREET at (530) 265-8686 or (530) 478-1213 or visit the OFF BROADSTREET website at www.offbroadstreet.com. 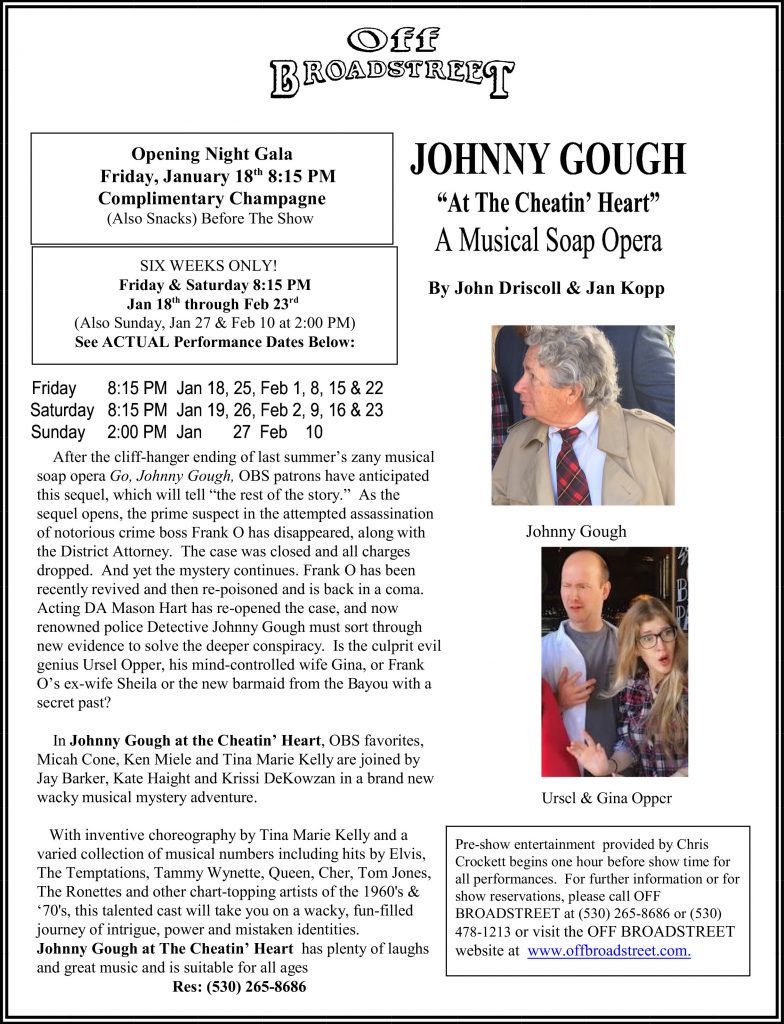