The joy of song rings in the new year 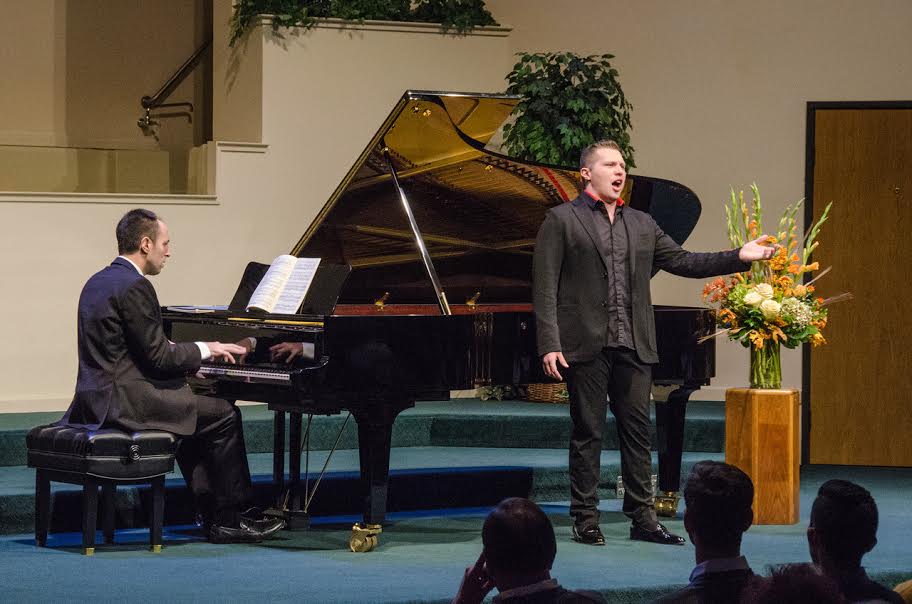 InConcert Sierra continues its Virtual Third Sunday Series in January with a performance by baritone Mario Diaz-Moresco and pianist Spencer Myer on Sunday, January 17 at 2pm.

The concert premieres a recording of the duo’s November 2015 InConcert recital that was well-received by the full-house audience. Diaz-Moresco’s resonant baritone voice is complemented by Myer’s masterful work on the piano. The recital program intertwines vocal works of Beethoven, Brahms, and Vaughan-Williams, with solo piano works of Brahms and Ravel.

Diaz-Moresco has garnered worldwide attention for his versatility and strong stage presence in both Opera and Leider. Lieder are German art songs from the Romantic period that are highly emotional and expressive with strong lyrical melodies and rich harmony, which Diaz-Moresco renders beautifully.

The pair opens the concert with Beethoven’s An die ferne Geliebt, a beautiful, intimate, and colorful piece. “We just think it’s a gorgeous way to open a program, and it’s a nice length, too. It’s about thirteen minutes long, so it’s substantial, but it’s not going to lose the audience’s attention. It’s an amazing piece, and actually I find that it’s not programmed very often,” said Diaz-Moresco.

The program includes Brahms’ Drei Intermezzi, Op. 117, Duparc’s L’invitation au voyage, Ravel’s Jeux d’eau and Sonatine, and Vaughan-Williams’ Songs of Travel. There are two encores recorded which are Schubert’s an die Music, and Lerner and Lowe’s On the Street Where you Live.

Described as “flawless” by Opera News, Diaz-Moresco studied at the University of Colorado and the University of Southern California and most recently completed the Professional Studies Diploma program at Mannes The New School. He has been a young artist with Chautauqua Opera, Central City Opera, The Glimmerglass Festival, a Stern Fellow at SongFest and a Vocal Fellow at the Ravinia Steans Music Institute. Mr. Diaz-Moresco was a finalist in the 2019 Jensen Foundation Vocal Competition.  Outside of being an active recitalist, opera highlights include Guglielmo in Così fan tutte, playing the lead role in Robert Ashley’s Dust, which was named one of the best classical music performances of 2017 by the New York Times, William in The Fall of the House of Usher (Glass), and singing the baritone role in Hydrogen Jukebox at Chautauqua Opera, under maestro Steven Osgood.

Spencer Myer’s career was launched with three important prizes: First Prize in the 2004 UNISA International Piano Competition in South Africa, the 2006 Christel DeHaan Classical Fellowship from the American Pianists Association and the Gold Medal from the 2008 New Orleans International Piano Competition. Myer is a graduate of The Juilliard School, where he studied with Julian Martin. He received a Doctor of Musical Arts degree at Stony Brook University. A consummate artist, Myer performs all over the world and has performed several times for InConcert Sierra.

“Spencer lights up the concert hall, and any room he enters for that matter, with both his personality and his artistry. He’s become a favorite of our audience, as well as our board and staff!” said Julie Hardin, executive director. “Ravel’s Jeux d’eau that he performs on this program is magical. If you haven’t heard Spencer perform before, you are sure to be a devotee after this concert.”

In December 2020, the duo gave a master-class for InConcert Sierra’s “Composers Project with Mark Vance” students in preparation for the class’ winter concert called Poetry in Song. The showcase will present new works by the eleven students featuring voice and one instrument.  Diaz-Moresco and Myer gave the class a lively instruction about the technicalities of composing vocal works.

The YouTube concert will remain online following the premiere.  The full program page with movements, as well as translations, can be downloaded from concert’s webpage on the InConcert Sierra website.