Welcome to Nevada City, a colorful town that has prepared for its future by preserving its past. 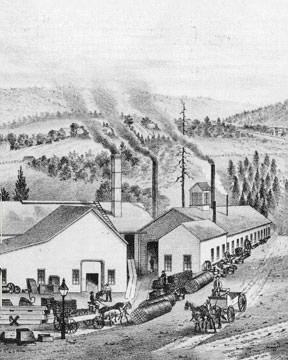 Nevada City is among the most interesting of California Gold Rush towns, attracting visitors from far and wide. The entire downtown district is a national historic landmark where guests enjoy quality restaurants, comfortable lodgings and a variety of fine shops, boutiques, galleries and museums, all flavored with old-fashioned Nevada City hospitality.

Bordering the Tahoe National Forest and located just minutes from many Sierra lakes and rivers, Nevada City is ringed by deep green pine-covered hills. Today, the town has a population is just 2,800 but it wasn’t always so peaceful. In 1850, there were 10,000 boisterous souls living here, and in the general election of 1856, the 2,082 ballots cast in Nevada City were exceeded in the state only by Sacramento and San Francisco.

“Preservation of the town’s historic appearance is important to the people of Nevada City,” Tyson said. “If it weren’t for the parking meters, you’d think you were back in time.”

Tyson says the town’s off-the-beaten-path location, on state highways 49 and 20, but away from the busy interstate highway system, has allowed Nevada City to retain its homespun charm.

Realizing the value of preserving California history for future generations, Tyson and other citizens were successful in 1985 in having the entire downtown area registered as a national historic landmark.

The historic district, including 93 buildings, is listed on the National Register of Historic Places. In addition, eight individual buildings are listed on the register and the town also contains 18 state and local landmarks.

There is even a plaque in the National Hotel parking lot which is dedicated to the ladies of the evening and their unique contributions to the Gold Rush. The plaque was placed by the fun-loving fraternity of E Clampus Vitus.

As the county seat, Nevada City served for many years as the commercial, governmental and professional center of Nevada County. Since the turn of the century, however, it has gradually relinquished its domination of the retail trade to nearby Grass Valley and has in recent decades actively developed its tourism industry.

Nevada City developed along the banks of Deer Creek in 1849.

Early reports told of miners who pulled a pound of paydirt a day from gold deposits along the creek. The town was first known as Deer Creek Dry Diggins and later as Caldwell’s Upper Store. Several major fires in the 1850s and early 1860s convinced the townspeople to use more brick in rebuilding their structures.

Civic leaders named the town Nevada, Spanish for “snow-covered,” in 1850 and the next year the newly-incorporated city became the Nevada County seat. The town’s name was later changed to Nevada City after its title was borrowed by the state to the east.

The town has had its share of firsts and famous people in California History. Former U.S. President Herbert Hoover lived and worked here as a gold miner in his younger days. Three former U.S. senators, George Hearst, A. A. Sargent and William Morris Stewart, lived in Nevada City.

The consolidation of water companies that formed the Pacific Gas & Electric Co. occurred here and PG&E’s first general office was located in the National Hotel. The area boasts several inventions in the fields of mining, water and electricity.

It was in May, 1853, that Professor Henry Durant, formerly of Yale University, met with a committee in Nevada City to formulate plans for an academy that was incorporated two years later as the College of California. It would later become the University of California, Berkeley.

In recent years, the Nevada City lifestyle has attracted a number of well-known writers, artists and musicians. The area also draws high-tech business entrepreneurs who are able to locate their enterprises away from the stresses of big city life.

While many California gold rush towns have disappeared into the pages of California history, Nevada City has rebounded time and again to emerge as unique blend of yesterday and today. Nevada City’s current cultural and economic renaissance is again proof of the town’s indomitable spirit.

“After more than a century of pioneer heritage,” says Edwin Tyson, “Nevada City remains the most complete gold rush town in California. It is a genuine small town and a living museum.

There’s more to Nevada City than meets the eye

The deep green hillsides, white church steeples and red brick storefronts are the first visible clues that this colorful Sierra foothills Gold Rush town is a different kind of place.

In a stroll though the narrow streets of the downtown historic district, the visitor soon learns there is more to Nevada City than meets the eye. There is, as a Los Angeles Times reporter recently observed, “a Nevada City state of mind. It’s a real place where people of different lifestyles manage to coexist sucessfully. Refreshingly, there is a there there.”

Nevada City is a place where business is done with a smile and pedestrians acknowledge each other on the street. Even the motorists are laid back. It is a local tradition to wait at stop signs and let the other guy go first.

Like other Gold Rush towns up and down the Mother Lode, Nevada City began in 1849. While other old towns have disappeared or fallen victim to urban sprawl, Nevada City, located 80 miles west of Reno, via Interstate 80 and scenic Highway 20, has managed to retain its old-fashioned charm.

Two factors that occurred in the 1960s and 70s helped save Nevada City.

The hippies and back-to-the landers who settled here brought new attention and commerce to a sagging Gold Country downtown that was half full of empty stores. At the same time, city leaders were early in recognizing that historic preservation could be the foundation of a strong tourist trade.

Two of the most important people in this era were David Osborn and Charles Woods. They moved here from Berkeley in 1957. They worked with a highly concerned group of residents to craft Nevada City Ordinance #338, the Historical Ordinance, adopted in 1968, to preserve the Victorian era buildings and architecture of Nevada City. Following that, The Ott’s Assay Office and the South Yuba Canal Building (now home to the Nevada City Chamber of Commerce) were to be destroyed for a freeway ramp. Together Osborn/Woods with many of the same players campaigned to move that ramp farther up Coyote Street and save those two all-important buildings. In 1972, they purchased the Miners Foundry, and dubbed it the American Victorian Museum.  Nevada City is fortunate that David Osborn and Charles Woods chose to live in, and embrace, the western Nevada County community. Read more

Today, the hippies who opened head shops, herb shops and health foods stores are established business people, some in more conventional occupations such as real estate, insurance and city government. Nevada City’s entire 90-building downtown historic district has been listed on the National Register of Historic Places. Through the changes, the town has retained an artsy, bohemian flavor that adds to its appeal.

Nevada City is located in thick pine forests at the 2,500-foot elevation.

Nevada City is high enough to offer an escape from valley heat yet low enough to avoid the clouds and thunderstorms and winter snows that often surprise visitors at the higher elevations. Today Nevada City is a gateway to the Yuba-Donner Scenic Byway and the rivers and lakes of the Tahoe National Forest. The area is attracting more visitors who are looking for easy weekend getaways from Reno, Sacramento and the Bay Area.

Nevada City is a pleasant 90-minute drive from downtown Reno. Summers here are warm and dry with daytime temperatures about 10 degrees cooler than the Sacramento Valley. Winters are cool and wet with average annual precipitation of 55 inches. Beautiful fall colors dominate the landscape in October and November.