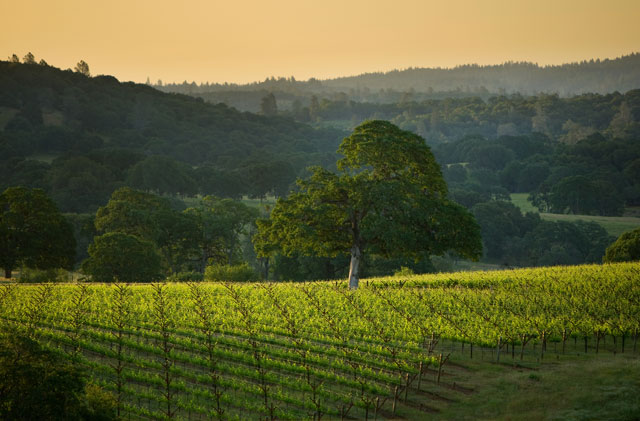 Vine roots grow deep in Nevada County. Our vine history stretches back to 1848 when Nevada and Placer Counties were still part of Yuba County.

The discovery of gold brought the influx of gold-seeking Argonauts, who arrived with mining pans, pickaxes, and grapevines hanging from their saddlebags. As soon as towns like Nevada City sprung up, grapevines were planted to supply wine for the thirsty miners.

As early as1862, a saloon on Broad Street was serving their customers wine that was grown and produced in Nevada City. In 1869, Francis Seibert won one of the first awards in California for his pure Zinfandel wine grown on Piety Hill in Nevada City.

By 1870, there were 450,000 vines in the county representing several hundred acres of grapes. Wines were selling for as much as $2.00 a gallon, a very respectable price. E. G. Waite produced a wine thought to be comparable to the Clarets of France. It was heady times for wine in Nevada County.

After the economic downturn of the post civil war years, the 1880s issued in another decade of vineyard growth. The demand for wine was strong and it became fashionable, as a gentleman farmer, to plant a vineyard. Grapes were even sold to Napa where they were prized for their robust color and flavor.

A 100 years later, in the 1980s, a modern version of Nevada City Winery was again producing wine and it was once again fashionable for gentlemen farmers to plant vineyards. The renaissance of the modern era was led by the likes of Bob Wilder, Dick Angel, Peter Arnold and Doctors Smith, Cobden and Jewett all who were among the first to plant vineyards.

The very first modern era vineyard can be traced back to 1974 when John Callendar planted the “Little Wolf Vineyard” on Perimeter Road in the south county. It was a seven-acre vineyard planted to seven different red varietals.

100 years separated these two golden eras with more than a few bumpy patches in between.

While the Cornish miners who came over from England to work in the hard rock gold mines preferred beer, an influx of German and Italian settlers at the end of the 19th century brought a wine tradition with them. Bierwagon, Personeni, and Locatelli are just a few of the names associated with vineyards or wineries in the early years of the 20th century.

While it is commonly thought that Prohibition put an end to Nevada County’s wine industry that is not the case at all. While commercially produced wine was illegal (although that did not mean production ceased entirely), interest in home winemaking increased dramatically. Halfway through this remarkable experiment in social engineering there were more grapes growing in Nevada County than had existed before the start of Prohibition.

The grape and wine business is famous for its boom and bust cycles. In 1927, the planting spree collided with the onset of the depression and prices fell through the floor.

Finally, with the repeal of Prohibition in 1933, half a dozen wineries opened for business in Nevada County. However, by then the wine market had shifted. Volume and value were all that mattered and mega producers like Italian Swiss Colony and Gallo dominated the market while California’s central valley was an endless source of cheap grapes. Nevada County wineries could not compete with that. WW II was the final straw and the last of the wineries of that era finally closed in the early 1950’s.

Things remained like that until John Callender planted his Little Wolf Vineyard in 1974 and the modern era was born.

Now, once again, there are hundreds of acres of vineyards dotting the county’s rolling hills and 20 wineries are producing world-class wines.

Rod Byers, CWE, is a Certified Wine Educator and wine writer as well as a California State Certified Wine Judge. You can find information about his upcoming Sierra College Kaleidoscope Wine Classes at www.pinehillwineworks.com and he can be reached at 530-273-2856.