As darkness falls and shadows lengthen, Nevada City, illuminated by flickering gas lamps, and Grass Valley, its storefronts concealing dark secrets behind their attractively painted exteriors, become the perfect setting for a ghost story. Or, perhaps, one should say ghost stories for Nevada County harbors more than its fair share of lingering spirits and for the fifteenth year, actor, writer and storyteller, Mark Lyon, will again offer his Haunted Nevada City and Haunted Grass Valley historical walking tours exploring the stories behind the many ghosts said still to reside among us.

“One of the joys of conducting these tours is the opportunity to offer an element of street theatre in my telling of our local stories,” states Lyon, who has enchanted audiences from Orlando, Florida to Victoria, British Columbia and across the Atlantic in stately castles in Ireland with his original one-man plays and who has shared true ghost stories on television and radio shows across the United Sates.

“Each year the tours change a little as I learn new stories which keeps the tours fresh,” continues Lyon. “Although due to circumstances beyond my control, I will no longer be able to conduct public tours through the interior of the Holbrooke Hotel on my Grass Valley tour, I will, however, still be sharing a wealth of stories about what I believe may well be the mot haunted hotel in the world while standing across the street.”

As the number of attendees on both tours seems to increase with each successive year, Lyon suggests that guests wishing to avoid a crowd consider choosing one of the earlier tour dates.

Haunted Grass Valley tours will depart from the Grass Valley Library at 207 Mill Street on Friday, October 12th, 19th & 26th at 7:30 pm. Haunted Nevada City tours will depart from 210 Broad Street (directly across the street from the National Hotel) Saturday, on October 13th, 20th and 27th and on Halloween at 7:30 pm.
Admission is $10, $5 for children 12 and under while children 5 and under are admitted free. Reservations are not taken. Guests need merely to show up at the tour departure location at the time of the tour. Private tours at other dates and times may be obtained upon request. 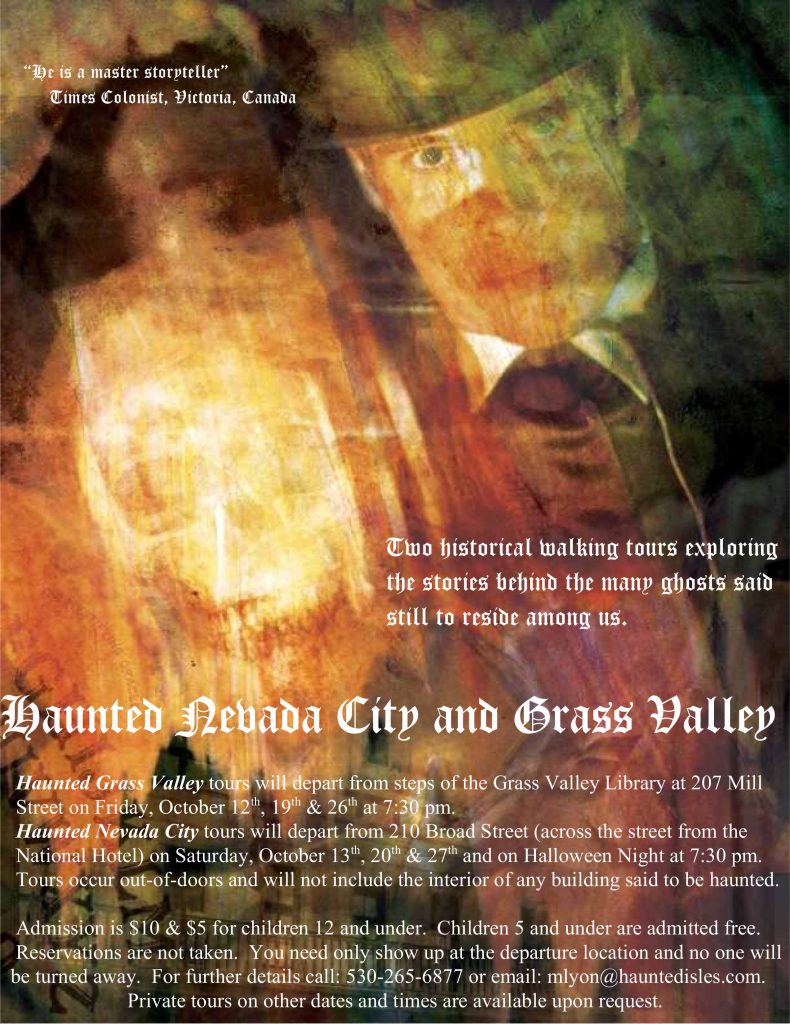