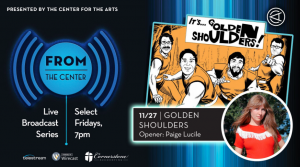 WHO: Golden Shoulders & Paige Lucile
WHAT:  Broadcasting LIVE From The Center
WHEN: Friday, November 27, 2020 | 7:00pm
WHERE: 314 W. Main Street Grass Valley, CA
WEBSITE:   https://thecenterforthearts.org/event/from-the-center-golden-shoulders/
ADMISSION: Free Livestream, Donations Welcome
INFO: thecenterforthearts.org | 530-274-8384
This year, Golden Shoulders is broadcasting their day-after-Thanksgiving show live From The Center on Friday, November 27, 2020 at 7:00pm pacific time. Paige Lucile is opening the night and you can watch online at thecenterforthearts.org or at The Center’s new Backstage Bar located in their back parking lot at 315 Richardson Street in downtown Grass Valley.
A long-tenured band from Nevada City, California, Golden Shoulders are known for their freewheeling mix of scrappy indie rock, power pop, and folk as well as a constantly fluctuating lineup which centers around the melodic songwriting of leader Adam Kline. For this special Thanksgiving weekend show the band features David Nicholson on drums, Brett Shady; vocals and percussion, Jonathan Hansard; vocals, banjo and trumpet, and Adam Kline singing and playing guitar.
It’s kind of a tradition. Golden Shoulders played their first day-after-Thanksgiving show in 2004 at Cooper’s. The following year, they played on the Saturday after Thanksgiving instead. In 2009, they played the Saturday after Thanksgiving at Crazy Horse Saloon & Grill. In 2014, they played two consecutive shows (an early show and a late show) the day after Thanksgiving at Kitkitdizzi, of all places. The next year, they were back at Cooper’s the day after Thanksgiving. In 2016 they took to the stage at The Center for the Arts the day after Thanksgiving with Aaron Ross and Davia opening, and then again in 2017.
Golden Shoulders returns to The Center for the Arts for their day-after-Thanksgiving show. This year things will be a little different.  They haven’t been inside The Center since the renovation.  Not only are they excited only to see the new theater, but also to see each other. Like many of the bands performing in the From The Center live broadcast series, they haven’t had many opportunities to perform together since COVID-19 shut down venues in March. The other difference is that they will be playing to a mostly empty room. With the exception of the small crew and production team, there’s no audience in the theater.  The band will be playing to the cameras, and to their friends and fans tuning in online.
Opening the show this year will be local songwriter, Paige Lucile Anderson. She started playing music at the age of 9 with her father. Shortly after learning guitar the rest of the family picked up instruments and Anderson Family Bluegrass was formed. Paige started writing songs at the age of 15. By the age of 17 she had written an entire collection of songs and the siblings formed a new band called The Fearless Kin. They released two albums and played together for four years. When Fearless Kin dissolved, Paige continued to pursue her passion for music. She has been writing and recording in Los Angeles, formed a new band, played bass for Family of The Year, and toured across North America and Germany. Paige finished recording a new album earlier this year and is planning on releasing it very soon.
The Golden Shoulders and Paige Lucile live broadcast is happening on Friday, November 27, 2020 at 7:00pm pacific time. This is a free event. A digital “Tip Jar” is available for donations to support both the artists and The Center. The livestream will be available online at thecenterforthearts.org and on the big screen at The Center’s outdoor bar, weather permitting. Visit thecenterforhearts.org to RSVP and for more information.