An all-star cast presents the big Off Broadstreet event of the summer. The Maltshop Café is a nostalgic tale of love and dreams set in the innocent days of 1963. Teen music idol Rock Stevens returns to his hometown to pick a female romantic lead for his upcoming movie. Since the musical is staged as a “Dress Rehearsal,” audiences will laugh as the cast attempts to rise above the various mishaps that often plague a production in the final stages of preparation. There are also dressing room scenes that take place outside the action of the main story line. And, in the traditional Dress Rehearsal “fantasy sequences,” each individual will reveal something unique and personal. Off Broadstreet regulars Jay Barker, Ken Miele, Kelly Nevius, Krissi DeKowzan, Tina Marie Kelley and Tasa Proberts are joined by newcomer Kenny DeKowzan (“Jerry Sitzer” from Beyond Karaoke) in this fun-filled musical delight. Song selections include number one hits from the 1950’s and ‘60’s from such artists as Jerry Lee Lewis,  Elvis, Connie Francis, Frankie Valli, The Shirelles and many more, several of which are performed to live instrument accompaniment. There are also some more modern musical surprises in the “fantasies.” Off Broadstreet Cabaret Dessert Theatre is located at 305 Commercial Street in historic downtown Nevada City, CA. Pre-show entertainment is provided by Chris Crockett beginning one hour before show time for all performances. For further information
or for show reservations, please call OFF BROADSTREET at (530) 265-8686 or visit the OFF BROADSTREET website at www.offbroadstreet.com 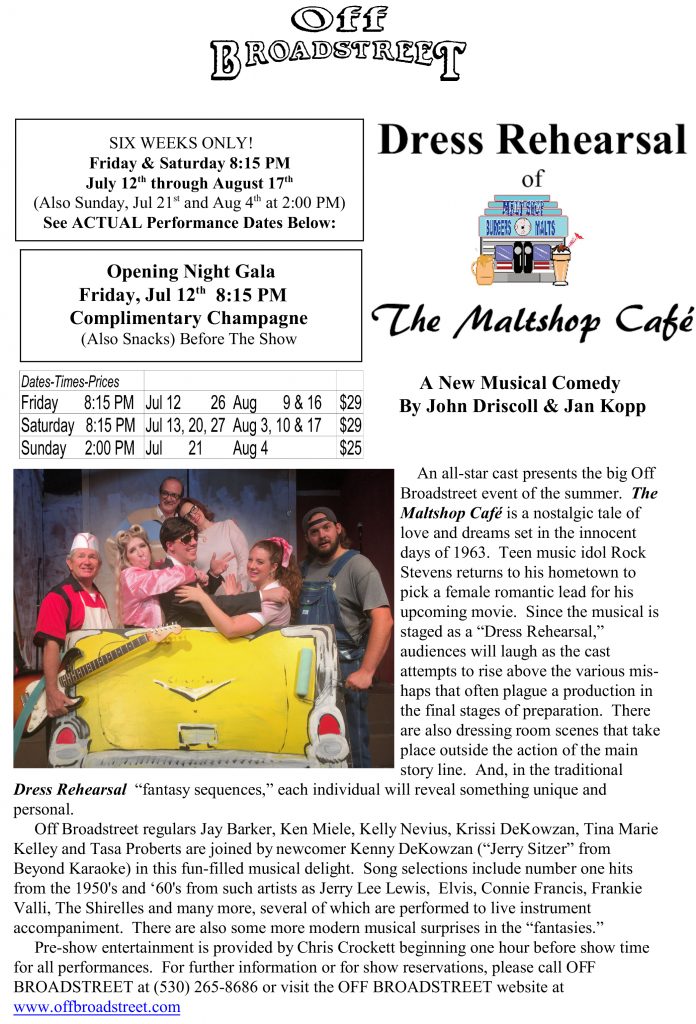