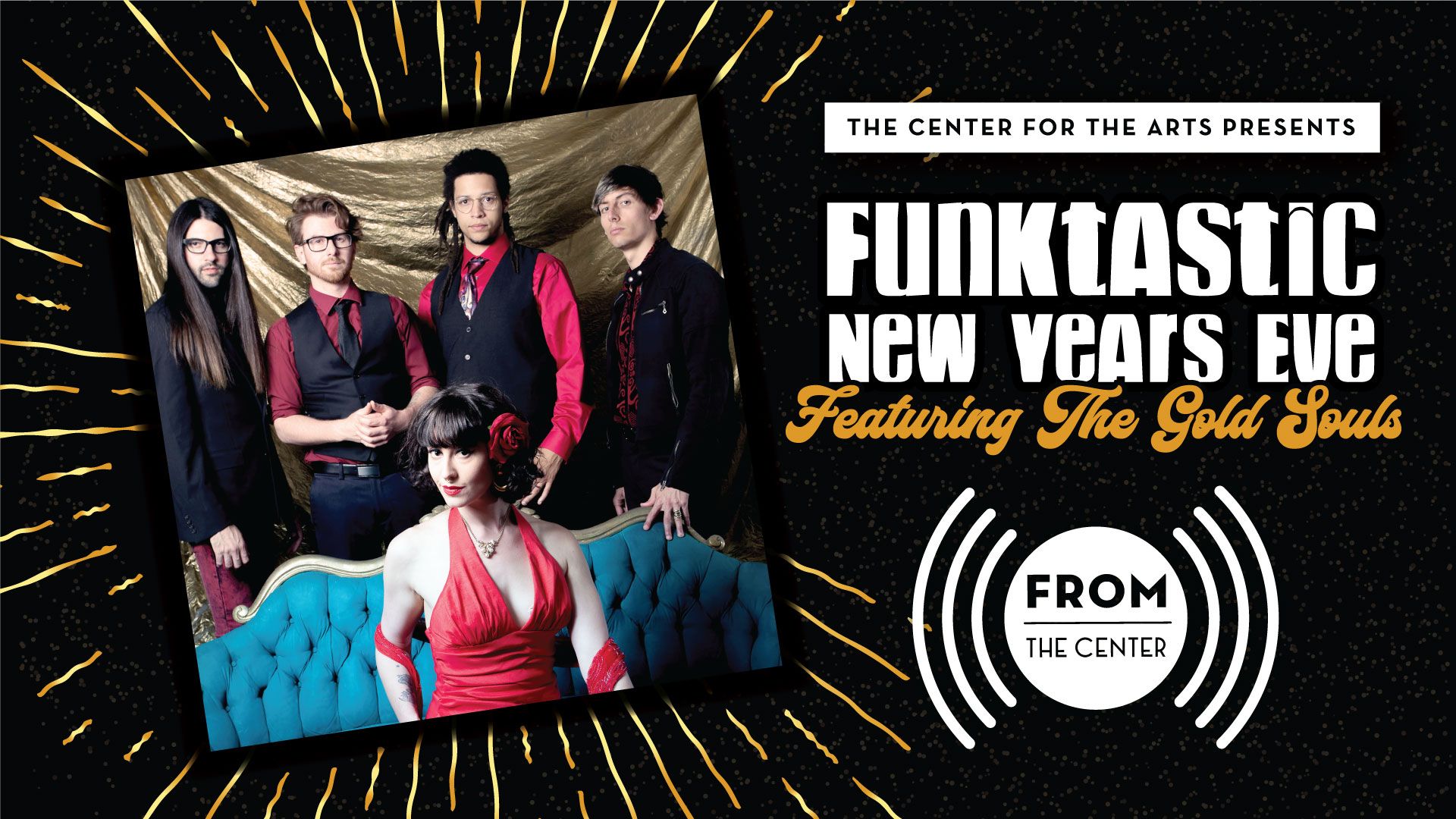 The Gold Souls are bringing the driving grooves of funk, the rich textures of soul, and the compelling storytelling of the blues to you, at home, with a special New Year’s Eve broadcast From The Center. Visit thecenterforthearts.org to RSVP for free.  Tune in on Thursday, December 31, 2020, at 7:00 p.m. Pacific time, or watch the replay whenever you’re ready to bring a little funk to your New Year.

This show was pre-recorded before the current stay-at-home order went into effect, and it will be the last free broadcast in the From The Center series.  The series began in June when The Center leaped into the world of livestreaming to provide gigs for artists and crews, and musical experiences for fans and members at a time when live audiences were not possible. While it is still unknown when audiences will be able to return to the auditorium, The Center continues to develop more ways for us to stay connected through the arts. Starting in 2021, From The Center shows will be ticketed. The Center for the Arts encourages you to become a member for free or discounted access to future livestreams and replays.

The Gold Souls burst on the Sacramento music scene in early 2017 and are swiftly becoming one of the most promising new talents in the area. Led by the dynamic Juniper Waller, the group is made up of young talent hailing from the Bay and Sacramento areas. With Darius Upshaw on guitar, Alex Severson on the keys, Billy D. Thompson on the drums, and Jace Dorn on bass, each member has a hand in writing and song composition, making The Gold Souls a truly collaborative effort.

They released their self-titled five song EP in May of 2017 and toured down the California coast soon after in support of the fresh blues, soul-funk EP. Their next single, “Nobody,” was released in late 2017 and was featured on Apple Music Blues’ Hot Tracks list. They released their full length album, “Good to Feel,” in June of 2018, an album that stuck to their core oath to never sacrifice the groove. Their next single, “True Blue,” was produced/engineered by multi-Grammy winner Timothy Bloom (Smokey Robinson) and was released in February of 2019. This past April, the band went on tour through Southern California, Arizona, New Mexico, Texas, and New Orleans. Their latest single, “Strongman,” was released this past summer (2019), a single that promotes a story of female-empowerment through rich soul textures and a vintage-inspired sound. The release was accompanied by a visually stunning lyric video in October of this year. After their debut at the Joshua Tree Music Festival, The Gold Souls wrapped 2019 with a NYE show with their fans at The Palm Playhouse.

This New Year’s Eve, you can join The Gold Souls and The Center for the Arts for a Funktastic New Year’s Eve.  This is a free public broadcast that will stream on YouTube and Facebook on Thursday, December 31, 2020 at 7:00pm Pacific time. Donations are appreciated to help compensate the artists and the crews working hard behind the scenes to bring art and music into your home during this challenging time. Visit thecenterforthearts.org to RSVP and for more information.

—
Since 2000, The Center for the Arts, a 501(c)(3) nonprofit arts organization, has grown into a leading presenter of music, dance, theater, comedy, literary and visual art, and family programming offering more than 150 events per year from its location in downtown Grass Valley. The Center recently completed a major renovation of its multiuse 21,000-square-foot facility in downtown Grass Valley, making it a premier performing arts destination. The venue includes the main stage, which accommodates up to 492 guests in configurable theater seats and up to 700 patrons for dance shows, and a 90-seat studio theater.